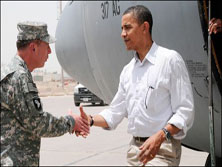 In a news story in the JPost this morning the headlines read, “I didn’t say Israel intransigent.” The story was about General Petraeus and what was or was not said by him as he testified before the Senate’s Armed Services Committee.

It was the third paragraph that caught my attention. “The enduring hostilities between Israel and some of its neighbors present distinct challenges to our ability to advance our interests,” the CENTCOM report read. “Arab anger over the Palestinian question limits the strength and depth of US partnerships with governments and peoples in the [Middle East] and weakens the legitimacy of moderate regimes in the Arab world.”

In this day and age speeches are carefully thought out and designed, words picked to get the message across, to be able to get the point across telling you what is going down and still leave you scratching your head after you read or heard it. Sometimes they lay it all on the line and we read right over it.

“Our ability to advance our interests” is a direct quote from General Petraeus. I must ask then, “What are the “interests” of America and her present administration?” In a poll published this week here in Israel only 9% of local Jews say US administration is pro-Israel; 48% call it pro- Palestinian.

This week Prime Minister Netanyahu was in Washington. He was received warmly at the AIPAC conference Monday night. Congressional leaders in both parties received him enthusiastically. That is where the warm reception stopped. President Obama met with the Prime Minister Netanyahu Tuesday and his reception was less then warm, some called the reception cold. No photos of the two leaders were released, there were no press conferences, and in fact there wasn’t any of the protocol normally afforded to foreign heads of state… Why?

The White House and State Department are trying to force Israel to divide Jerusalem and divide Judea & Samaria, why… you have to go back to what General Petraeus said,
“our ability to advance our interests” The Obama administration wants to carve up Israel, to give land which I must add was gained in a defensive war, back to those who attacked Israel.

Has any country ever given back land they won in a war? With this logic, when will America go back to the American Indian or California and Texas back to Mexico? It is in the INTEREST of the Obama administration to carve up Israel.
Joel 3:2 reads…”I will also gather all nations, And bring them down to the Valley of Jehoshaphat; And I will enter into judgment with them there on account of my people, my heritage Israel, Whom they have scattered among the nations; They have also divided up my land.” You think the United States is having a hard time now, wait until G-D “enters into judgment with them on account of (His) people…” because “they have also divided up (His) land.”
It seems that the “ability to advance our interests” is on a collision course with G-D and I don’t have to tell you who will win!