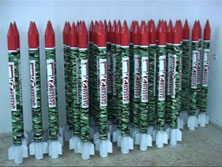 A top Hamas official warned Saturday against what he said were the consequences of breaking ranks with Hamas policy toward Israel. Senior Hamas official Mahmoud Zahar said that anyone who fires rockets from Gaza into Israel is a “rebel.”

That should be comforting words to hear for those of us who live in Sderot but they aren’t. With each Kassam attack on Israel from the Gaza terrorist led government comes an Israeli response by the IDF.

Whenever you read in the paper that Israel has been attacked again, the next edition of the paper will tell the story that the IDF destroyed this weapons manufacturing plant or that a smuggling tunnel has been destroyed. I applaud the Israeli government for not just sitting back and doing nothing in response to the terrorist aggression against innocent men, woman, and children; after all Sderot has no military installations or bases, no military significance what so ever.

Cease fire in the Islamic language is the word “Hudna”. Hudna is not a cease fire as most understand the words “Cease Fire”. Hudna is a TEMPORARY laying down of arms, ONLY to pick them back up at a more beneficial time. So when Hamas leaders say we have entered a cease fire with Israel it is not in hope of a long term peace for both parties but only ‘it is in our best interest to stop the fighting for now so we can regroup, restock, retrain and come back stronger at a later date.

So what is so alarming about this news coming out of Gaza and from their leader Mahmoud Zahar? Just this… If Hamas can put a temporary stop to the different factions in the Gaza from firing Kassams into cities full of innocent men, woman, and children then Israel will have no reason to retaliate and bomb manufacturing plants and smuggling tunnels. This would in actuality allow Hamas to build up their arsenals in peace.

If Israel does continue to bomb manufacturing plants and smuggling tunnels then Hamas will get up on their soap box and yell ‘Look what Israel is doing to us” Israel can’t win either way. That is the reality of life in Sderot.