In spite of three Kassam rocket attacks, we still had three hundred plus kids come out to Thursday’s Purim celebration. That night, around fifty adults came to the Bingo party. We praise G-D that the first two Kassams fell during the time we were setting up and no children were present. The third fell after the kids had gone home and before the adults arrived.

The pre-school and kindergarten kids came to celebrate first. They came to the hall that had hot dogs, cotton candy and punch. There were four tables set up with art supplies, a face painting table, a hair styling table
and a table for making plaster of paris masks; there were four different games for them to win prizes at and they were greeted at the door by Noreet the clown. 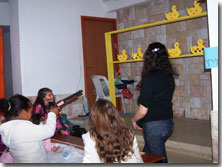 They played and ate until Noreet the clown entertained them with games, dancing and magic tricks. At three, when school was out, the older kids came and they had the opportunity to enjoy the celebration. There were kids of every age from babies to teenagers. All of them were laughing and playing and having a good time in a “safe” building. It was a joy to see kids being kids, having fun and being safe.

By five O’clock the cotton candy operator had gone through four hundred and fifty stick, the four hundred plus hot dogs we bought were gobbled up, the ten gallons of punch gone, all the prizes were given out and the gift bags of candy were gone. Now it was time to clean the place and get ready for the evening celebration for the adults who have been wounded by Kassams. 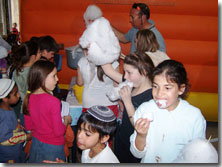 As soon as the floor was swept and mopped, the tables were set out once again. New table cloths were put on them along with cups, bottles of soft drinks, plate of cookies; bowls of chips and of course Bingo cards.

By seven thirty, we were all set up and as our guests – our friends came in the hall, they were welcomed by traditional Purim karaoke music. Some came with limps, some still on crutches, others with the help of canes and walkers, but they came. They sang songs of praise, those who could dance danced; all were rejoicing that after thousands of years of “Hamans” we are still here rejoicing in the faithfulness of our L-RD and G-D. 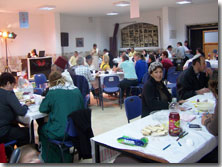 We thank Ha Shem for allowing us to be part of what He is doing though Hope for Sderot. To see kids playing and laughing… just being kids, made the weeks of preparation well worth it. And to see those who we see each week enjoying themselves, doing something a little special, was the icing on the cake. As the evening ended, each family was given a Purim gift basket in keeping with the words Mordecai wrote…

”And Mordecai wrote these things and sent letters to all the Jews, near and far, who were in all the provinces of King Ahasuerus, to establish among them that they should celebrate yearly the fourteenth and fifteenth days of the month of Adar, as the days on which the Jews had rest from their enemies, as the month which was turned from sorrow to joy, and from mourning to a holiday; that they should make them days of feasting and joy, of sending presents to one another and gifts to the poor.”