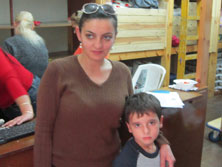 Tuesday night we celebrated the first night of Hanukah. We sang the traditional songs and ate the traditional jelly filled donuts. As we lit the first candle on the menorah all the different meanings of Hanukahs past came to mind. Was the miracle that the oil lasted eight day; was it that even a small amount of consecrated oil was found to light?

Maybe it was that the small army of the Maccabees was able to defeat Greek army to take possession of the temple once again. All of them were miracles in and of themselves. The fact that the temple was cleansed and build a new alter was built and temple worship was restored that also was a miracle.

The oil lasting eight days seems to come forefront and today Hanukah is a “Festival of Light” ( and jelly donuts!) and we saw the miracle of light take place once again today, let me explain.

We met Zoya for the first time last week. She came in to apply for assistance. As we looked at utility bill and talked about them she told us that the electric had been turned off two weeks ago because they could not pay. We asked how they were living without electric and she just gave us a blank stare and shrugged her shoulders.

The gas is next to be turned off and after that the water. Obviously there is no Hanukah miracle there, but one is desperately needed… But wait!

She told us that her social worker could pay half of what the power company needed to restore the electric but she has no way of coming up with the remaining 1600 sheckles. We told her if social services would give her half we would pay the other half for her.

Zoya called us Tuesday ( the first day of Hanukah) and said Social services had given her a check for half. She asked if our offer was still good to help with the rest. We reassured her it was and she could come in to pick the other half of the money for the electric bill.

She came in and with a tear in her eye picked up the other half and was on her way to Ashkelon to pay the bill. The power company said the power would be restored to her home that afternoon.

“Festival of Light” was truly experienced by Zoia and her family last night, as the first Hanukah candle was light in her home, so to for the first time in three weeks her home had electricity and was full of light.