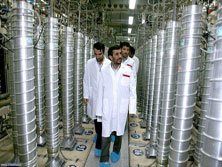 So also with the enriching of uranium; seventy percent of the work toward reaching weapons-grade uranium took place when Iran enriched uranium to 3.5 percent.

Meanwhile, enriching uranium under the guise of medical needs will get Tehran much closer to possessing weapons-grade material. It much easier to make the leap from twenty percent to ninety percent than it was to enrich from five percent to twenty percent.

Once the uranium is enriched above twenty percent, it is considered highly enriched uranium. The uranium would need to be enriched further, to sixty percent and then to ninety percent, before it could be used for a weapon. The last two steps are not that big a deal, they could be accomplished at a relatively small facility within months.

I once thought twenty percent enrichment, they have another seventy percent to go, that will take awhile… not so! Why do they lump twenty percent and ninety percent U235 together as highly enriched uranium? Iran will find it much easier to go from twenty to ninety, than from five to twenty.

An important thing to understand about the enrichment process is that it is about the removal of undesirable isotopes. For an example; if you have 1000 atoms of uranium, seven of them will be the fissile isotope Uranium 235. The other 993 are useless Uranium 238. To make reactor fuel, Iran or any other country would remove 860 of the non-U235 isotopes, leaving a U235 to U238 ratio of 7:140 or five percent.
To make fuel for the Teheran Research Reactor, Iran removes another 105 of the non-U235 atoms from the 140, leaving a ratio of 7:35 or twenty percent. To make a bomb, Iran needs only to remove 27 of the remaining 35 atoms, leading a ratio of 7:8 and you are at 90 percent.

Iran’s recent announcement that they are at the twenty percent enrichment point begins a new and potentially dangerous turn in the situation. If Iran enriches a significant amount of U235 to 20 percent and that is their most recent statement, Iran would be able to “top off” the enrichment process in a small, clandestine facility like the one near Qom. The answer to the real intentions of Iran is pretty obvious. They passed medical and industrial grade, so what is next… The old Kingston Trio song lyrics still hold true today “ mans been endowed with the mushroom shaped cloud and we know for certain that some lovely day some one will set the spark off and we will all be blown away”.