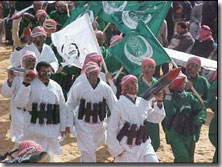 The current cease fire between Hamas and Israel is due to expire December 19, 2008, just two days before the beginning of Hanukah. One must first understand the Islamic concept of a “Hudna” or ‘Cease Fire”. The Islamic Hudna is a lying down of arms for a time so they may restock, regroup and come back even stronger on another day.

Since the cease fire of the second Lebanon war there have been numerous, documented accounts of Hezba Alla doing just that in the north, just as Hamas has been doing in the south. Numerous underground supply tunnels have been destroyed by the IDF,

each tunnel that is destroyed come with a price tag of Kassams fired into Sderot.

Israel’s Prime Minister Ehud Olmert, said “We will not put up with rocket” fire from the Gaze during recent meeting regarding recent rocket barrages from Gaza, in the past few weeks. In response. Hamas said, whether the ceasefire is terminated now or as planned on December 19th, they will not renew a ceasefire agreement under current conditions. They demand guarantees against closure of crossings and request that the ceasefire extend to the West Bank.
Two hundred and fifty rockets and mortars have been fired in the recent outbreak of terrorism . Hamas continues to build its arsenal, firing rockets and mortars and dig tunnels to kidnap Israeli soldiers. Israel for its part continues to conduct air strikes and raids into Gazan territory in response to identified threats. And the truce continues.
Hamas is restocking its arsenal, Israel is planning its defence and the people of Sderot feel the wrath. So for the four months or so of some what quiet the people of Sderot will once again pay the price.