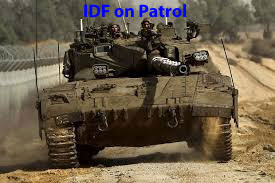 Since our last newsletter the tension on the Gaza border has not subsided but only escalated. There have been numerous reports of cross border shots being fired as well as mortars being fired at IDF personal detection and destroying Hamas dug and sponsored terrorist tunnel.

In the still of the evening you can hear the IDF tanks patrolling the border as well as drones flying over head looking for terrorist trying to make their way into Israel.
It has been two year since the last war with Hamas in Gaza, and although both Hamas and Israel both say they don’t want another war, Hamas is actively digging tunnel into Israel, which are just outside our city gates as well as other kibbutzim who border Gaza.

Over the past year Hamas has not given all their residents knitting needles or crochet hooks; they haven’t taken up needle point and they haven’t spent the past year knitting and crocheting but rather rebuilding, resupplying, retraining their troops for the next and inevitable war. 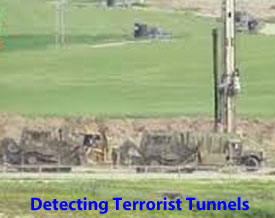 We talk about a “Cease Fire” and with our understanding of the word, it means to stop and lay down ones arms and find a solution and a resolve to the fighting. Hamas uses the word “Hudna”, not “Cease Fire”.

The definition of “Hudna” sounds a bit like our word “Cease Fire” but with one HUGE difference. Hudna means to stop and lay down ones arms ONLY to become stronger and to pick them up again at a later date; a Big difference! This is why Hope For Sderot is still here, still helping those who are suffering from ATSD (Accumulative Traumatic Stress Disorder) for the past sixteen years of the constant threat of a terrorist attack at any moment day or night, 24/7 365 days a year.

This is why we still send out newsletter, and hope and pray for your support. Just the other day I received a news story from a friend, it reads like this…

Israelis Living Near Gaza Warned to Prepare for Emergency Evacuations

Fearing a worst-case scenario following a recent rise in tensions between Israel and Gaza, the Defense Ministry issued a written warning on Tuesday for all residents living near the Gaza border to have packed bags at the ready. “In the event of an emergency, there is a decision to completely evacuate,” the letter stated.

Increased efforts by the IDF to uncover and destroy Hamas terror tunnels, such as the one discovered in April, have sparked frustrations along the Gaza strip. Angrily responding to Israel’s operations against the tunnels, IDF soldiers stationed at the northern border came under Hamas fire multiple times just last week.

Should tensions reach an absolute peak, residents have been instructed to “lock all doors, close the windows and blinds, take personal weapons and any pets, along with food, and turn off the gas valve,” Channel 2 reported. They are also required to report to relevant security personnel upon departure.

As for the means of escape transportation, civilians may only travel via private vehicle or by buses provided by local government councils, The Times of Israel reported. Additionally, they were given explicit instructions on which communities to reach for safety if necessary.

Despite the extensive preparations, however, Israeli officials emphasized they did not believe there is a serious threat of renewed conflict on the Gaza border. Hamas, as well, conveyed to Israel through Egypt that it does not seek another war. But the terrorist organization has been caught numerous times enhancing their arsenal by smuggling in weapons, lending serious doubt to their assurances.

The latest escalation comes during what some may consider precarious timing. This July will mark two years since Operation Protective Edge, a counter-offensive attack against Gaza in response to ongoing rocket fire by Palestinian terrorists. Following the war, the region saw a long period of relative calm. Recent activities, however, have renewed tensions in the area, provoking the Israeli government to take defensive precautions.

This is why you are receiving this newsletter, to keep you informed of our daily struggles, to invite you to join us in our daily struggles, even during this relatively calm period because we know, as history has proven it will not stay this way for long.
We welcome your prayers and support as we help those who have living with this ongoing stress for the past sixteen years. Click here to become part of the Hope For Sderot and please donate today.