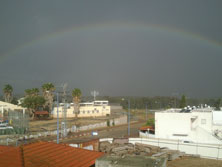 Since the 21st of November we went to sleep last night to quiet, no outgoing artillery, no incoming rockets, no fighter jet noise and no Iron Dome interceptors being fired. It was nice to lay my head down and not feel the constant churning from my insides.

In the first hours of the cease fire there was a total of 20 rockets launched at us and the “Tseva Adom” alarm had gone off in Sderot once at 9:12 P.M. just twelve minutes into the cease fire. I was hoping this was not another cease fire I slept through.

Four days ago the steel plate that has covered the window in the bomb shelter was rolled back for the first time in 7 days. The smell of the fresh morning air with its chill was welcomed as was the sun and its light as it filled the sky with a brilliant orange sunrise.

Today is the fifth day of the cease fire between Hamas terrorists and Israel. It seems so strange to hear nothing, no booms from outgoing artillery shell or incoming Kassams.

We did however there was a “Boom” and a “Crackle”; it was the sound of thunder. As it rumbled in the early morning hours it had a relaxing sound to it, knowing it was from above. With the thunder can the rain as if to wash away the dust and smell of the past week. 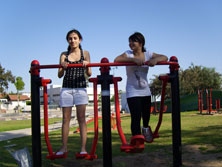 The past week has been trying to say the least. With over 1500 rockets fired at not only us but all the other cities in the south, we spent many sleepless night and many nights with broken sleep. For the past few nights to be able to sleep the night through without being woken up by “Tseva Adom” or the constant booms has been wonderful. School has started up again and people are starting to go out a little bit more.

From a purely financial standpoint, now the cleanup begins, not just the damage left behind from the Kassams but all the other damage to the city, the people who could not go to work the small shops and factories that were closed due to the terrorist attacks from Gaza. For most it is a paycheck that cannot be made us and production that will never go out the door.

From a psychological and emotional standpoint we now head into the Post traumatic mode of the current escalation but we continue to live with a situation that is by no way a “Post” situation as we know all too well the present calm can change with a fifteen second notice as “Tseva Adom” can sound at any time, even during a cease fire. 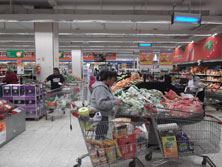 People have been affected by the past week of fighting. One person ( we are talking about adults) I talked to is now afraid of the dark and night, another person no longer feels safe in her home which is on the top floor, for another their appetite has not returned and another said the quiet is just as scary as all the noise was.

One of our volunteers was placed on such a heavy tranquilizer that when she came in on Wednesday we had someone drive her back home. Twenty percent of the people we give food to did not come in last Wednesday to pick up their food because they were to frightened to come get it. We will see what this coming Wednesday will bring as we open our door to once again to help our brothers and sisters.