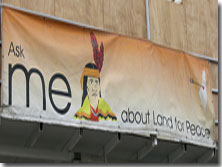 “The truth is that Jordan is Palestine and Palestine is Jordan,” said King Hussein of Jordan, in 1981.

Apparently there has been a Palestinian homeland for quite some time now… minimum 28 years according to my math. So why is Gaza, the West Bank, Samaria and all the other parts of Israel so important to create a Palestinian state when one already exists?

A Palestinian state; the land is not the issue; it is something bigger then that. In the past, the Palestinian Authority (PA) and Hamas have been offered peace proposals that gave them ninety-five percent of what they demanded and they would not accept it. You see, they don’t want peace, they really don’t want the land either… what they want is the annihilation of the Jewish people.

If you took all the land given to Israel in the Belford Declaration of 1917 and represented it by an American football field (360 feet or 120 yards long: 160 feet or 53 1/2 yards wide… or 57,600 square feet) and you take the portion of land Israel currently possess, it would be no larger then one square foot or one sixth of one percent. As long as one Jew is on that land it will be one to many for her enemies.

Iran is determined to wipe Israel off the face of the earth as is the wish of Hamas, Hezb-allah and others. Why? We have conceded our land piece by piece for peace and still there is no peace… why don’t Iran, Hamas and Hezb-allah want peace?

It is something even bigger than that. In reality, it is a war between G-D and satan. If there is no Israel, no Jewish people, G-D is made a liar. G-D promised that Israel will always be a people before Him. In fact G-D said…

“Thus says the L-RD, Who gives the sun for a light by day, the ordinances of the moon and the stars for a light by night? Who disturbs the sea, and its waves roar (The L-RD of hosts is His name). If those ordinances depart from before Me, says the L-RD, then the seed of Israel shall also cease from being a nation before Me forever.” Thus says the L-RD: “If heaven above can be measured, and the foundations of the earth searched out beneath, I will also cast off all the seed of Israel for all that they have done, says the L-RD.” Jeremiah 31:35-37

The road map to peace is in the hand of G-D, not mans. There is one plan and only one plan; and it includes both the land He gave His people and His people Israel. Any and all other plans will fall, they will all fail. Just a thought… what map are you looking at and what plan are you listening too?