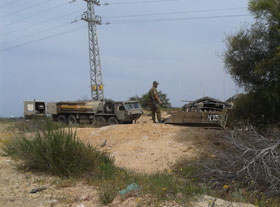 In Israel within a few months after you graduate high school; whether you are a boy or a girl, you begin your two year mandatory service in the military.

Because of the ever present threat on the people and the state of Israel these eighteen and nineteen year old solders (kids) walk around with loader M-16 rifles all the time. When I look at these kids I think, they should be at the beach having a good time or maybe starting their studies in collage, yet they are putting their young lives on the line, all their hopes and dreams for their future on hold as they protect us.

From time to time we have an opportunity to show our appreciation to them for all they do, for all the risks they take daily. The other day was one of those opportunity. As we driving I noticed a group of solder just a short distance from the road in the middle of a training exercise. I thought to myself “Its been a while since we have done something for our solders” but I kept on driving to where we needed to go. 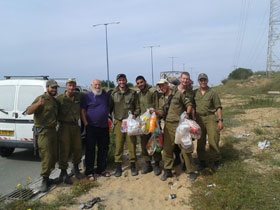 Little did I know my wife was thinking the same thing. On our way back the soldiers were still in the field under the hot Sderot sun. My wife turned to me and said “you know what” I said “yea I do” and without another word spoken we turned the car around and headed back to the store to pick up some treats for them.

As we pulled the car up to their training site, their security team approached us. We told them we had some goodies for them and one of them went to check with their commanding office to see if it was ok for them to receive them.

With a nod from their commander’s head, training came to a halt as we emptied the car. As I looked at them I saw kid old enough to be my son or grandsons and it broke my heart to think that in the next war maybe one of these kids who are right now taking a case of cola and a bunch of chips may not come home. 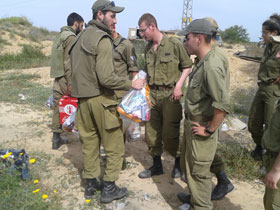 Unfortunately when your tiny country is surrounded by people and governments that want to wipe you off the face of the earth that becomes the reality of live in Israel and in Sderot.

It was a joy to spend a few minutes with them, to say “Thank You” and see the smiles on their faces as they went back to their training.