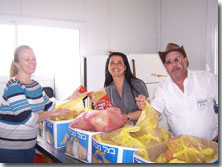 “We were closed for three months” Miriam told us on the day we went to visit her. There had been about thirty people who came through the door on that day. “Before we had to shut our door, we were feeding almost one hundred and fifty
a day. The word will get out that we are open again.”

How are they providing for the hungry of Sderot? The volunteers (everyone who works there is a volunteer) have been supplying food from their own homes and Miriam struggles to pay for the gas and electricity out of her own pocket.

They charge three shekels per meal. Miriam says that really amounts to very little of the two thousand shekels a month it costs to operate the soup kitchen every day. What those three shekels does is give the people that come to eat their self respect and dignity.  They are not just getting a free hand out but are paying their own way.

Today, we were able to bring her fresh vegetables that we had in abundance from our Thursday food distribution; potatoes, tomatoes, carrots and cabbage. Miriam was thankful for the help, we were thankful to be able to help in some small way and we look forward to see how the L-RD will use us in the future to help out with the soup kitchen and Miriam’s ministry.