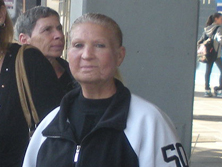 Last time we told you about Shoshanna, one of our volunteers we hope to bless with a new set of dentures. She has lived a hard life from the age of four when she was the victim of a senseless, mean and hatful terrorist attack on a innocent blue eyed, blond headed four year old girl.

At the time of this horrendous attach Shoshanna and her families were living in Morocco, a country that was embroiled in civil unrest between Moroccans and the French..

During that time in Moroccan history the France exiled Sultan Mohammed V in 1953 and replaced him with the unpopular Mohammed Ben Aarafa. His reign was perceived as illegitimate and sparked active opposition to the French and Spanish protectorates. In August 1953, Ahmed Belbachir Haskouri, the right-hand man of the caliph of Spanish Morocco declared Sultan Mohammed V as the legitimate sultan of Morocco in its entirety in the grand mosque in Tetuan.

That declaration sparked a furry of violence in 1955, when Shoshanna was just four. Moroccans attacked French and other European residents in the streets. Because Shoshanna had blue eyes and blond hair she was perceived to be French thus she fell victim to the attack that would forever change the life of this your year old little girl.

Her mother had left the house to take one of her siblings to school that morning and asked a neighbor to please keep an eye on Shoshanna as she played outside in front of her home. As Shoshanna was playing some Moroccan Arabs came up to her. She recalls “ I thought they were coming to just play with me.” Instead of playing they poured gasoline over her head and set her on fire. “I started screaming” as the terrorist fled the scene.

It has been a long 59 years for this 4 year old blue eyed blond headed little girl and I pray with all my heart that some kind soul will find it in their heart to put a smile on face that is equal to her heart. If just for a second you would put your yourself in Shoshanna’s shoes and feel the years of being ostracized by your pears, we won’t even talk about the pain and suffering; (at least not yet) for a second and let G-D touch your heart and put just an ounce of compassion in it twords shoshanna; maybe then we will see a picture of her with a new smile on this web site.