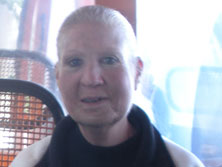 We are hoping to restore a smile to just one part of Shoshanna’s life, but it will take your help. She has lived a hard life from the age of four and it is our hope, through the grace of G-D and through the moving of His spirit that your heart may be touched to help with a new set of dentures for her.

Shoshanna at the age of four was caught up in the Moroccan / French conflict of 1955 as this four year old little girl played outside while her mother was taking her siblings to school. Because of her blue eyes and blond hair this little Jewish girl was mistaken for a French child and as set on fire by Moroccan Arabs.

She was rushed to the French hospital with burns on sixty percent of her little body. She does not recall how long she was in the hospital recovering, nor does she remember how many operation and skin grafts she has been through. But she does recall that for the next seventeen years of her life she would be in and out of the hospital.

When asked what happened and who did this thing to her it was established that it indeed was the Arab Moroccans that did it but they were advised not to tell the truth in fear that the rest of her family would wind up the same way. On the advice of the doctors in the hospital the explanation given to the Moroccan authorities for her burns was, they were from a candle she fell on.

The people in the neighborhood were also advised to deny the truth as well. In fear for their own personal safety they told the investigators that the family was crazy and it was not uncommon for them to do crazy things.