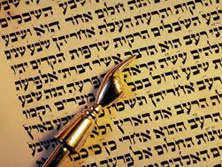 The Torah was given by G D to the Jewish people on Mount Sinai over 3300 years ago. Shavuot is the holiday to remember the giving of Torah and a time to rededicate our lives to His commandments, principal and precepts of Torah. It would be equivalent in today’s world of renewing your marriage vows.

The word Shavuot means “weeks.” It marks the completion of the seven-week period between Passover and the giving of the Torah; from the time of our deliverance from bondage in Egypt to the day on Mt. Sinai when G-D gave His ten commandments. Some call this Holy Day The Feast of Weeks, The Feast of Harvest or The Day of First fruits. Leviticus 23:15

It is during these seven-weeks that we look forward too and count the days (Counting the Omer) to that anniversary day, when G-D entered into this wonderful relationship with us and gave us His commandments. It’s like the excitement an engaged couple experiences as they spend time making preparations for their marriage. They count the days until the “Big Day”

The giving of Torah was that ‘Big Day”. It marked the beginning of this new walk with our G-D. The Torah gave the terms of the agreement between G-D and His people and they were set… in stone! The sages have compared it to a wedding between G D and the Jewish people. You could say, the prenuptial agreement was read and accepted.

Shavuot also means “oaths,” On this day G D swore to love, honor, cherish and protect His people and they swore to love honor and obey him, cleave to Him forsaking all other (gods).

The marriage started out good; well maybe it was just o.k.; well admittedly the marriage had problems from the very beginning. “A stiff necked, hard hearted people” is how the children of Israel were described by G-D.

In a marriage, the first years are the hardest. The first generation of people that crossed into the Promised Land had their share of problems but for the most part were somewhat a faithful spouse… But then something when terrible wrong!

“When all that generation had been gathered to their fathers, another generation arose after them who did not know the L-RD nor the work which He had done for Israel. Then the children of Israel did evil in the sight of the L-RD, and served the Baals; and they forsook the L-RD G-D of their fathers, who had brought them out of the land of Egypt; and they followed other gods from among the gods of the people who were all around them, and they bowed down to them; and they provoked the L-RD to anger. They forsook the L-RD and served baal and the ashtoreths.” Judges 2:10-15

The marriage really never got any better over the years. There were periods of “godly kings” that did that which was right in the sight of the L-RD but overall our G-D has put up with an unfaithful wife. I am that unfaithful spouse as well.

Does it mean I have stopped trying and am no longer working on my marriage, and don’t care any more? Does it mean I don’t love my G-D? NO… What it does mean it that there is a war that goes on within me, a battle over good and evil. A battle of wanting to do what is right in the sight of the L-RD versus being a person who says, “I have gone astray like a lost sheep”; “I am prone to wonder from the G-D I love”.

“You shall not take the name of the L-RD your G-D in vain, for the L-RD will not hold him guiltless who takes His name in vain.” That means more than just putting “dam it” after using his name.

It means if I am going to call Him my G-D, I can’t prostitute myself to every other god that comes around in a shiny wrapper or to live my life as if He is not my G-D, other wise I have taken His name in vain.

In light of Shavuot, isn’t it time we reading a copy of the contract we signed with our G-D, the day He became our G-D, our L-RD and our redeemer, the day we said “I Do”.