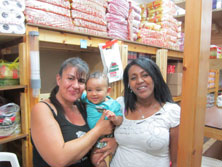 I received a phone call on Thursday from someone I did not know. The person on the other end said he wanted to bless some people here in Sderot for Shavuot. He had a set amount he wanted to spend and was hoping to bless as many families as possible; He asked if I could help.

I told him I would get back to him within an hour with some names of people he could help. Eti called him back and we started to make plans to meet with him, his wife and his son, but nothing was set yet.

Meanwhile one of the people we help who just so happened to be on the list we prepared for our benefactor, called and was in tears. He had no food for Shabbat or Shavuot and was wondering if we could help him with food. I told him right now we could not help. Sometime we are able to help people with utility bills, food for Shabbat, or other special occasions or needs but we just didn’t have it right now.

I was troubled that we could not help Élan and asked YAH to help us help him. The dots still hadn’t connected yet. Did I tell you that sometimes, I’m not the sharpest pencil in the drawer!

We met with Itzac, Hadas, his wife and their son Jacob it was then that the dots started to connect. You see He had called three other organizations before us and he hadn’t received a return call back. He had been praying that G-D would send him to the right place to help the people G-D knew needed the help.

This blessing was for Élan, but seven other families also were blessed. It seems YAH knows our need before we even pray, before we ever ask. Itzac and Hadas had been saving their change for the past year and by now they had saved one thousand shekels.

YAH had put it on their hearts a year ago to save the change because He knew Élan was going to cry out to Him and ask for help. YAH also knew that I would cry out to Him for help for Élan and He knew that Itzac and Hadas were willing vessels to be used by Him.

As we shared with them about the phone call we received earlier in the day from Élan, Itzac said that there were a few hundred shekels left over from their shopping spree and he wanted to give it to Élan as well.

Someone else added to the money we were going to give to Élan and with this addition Shabbat and Shavuot were not going to be lacking anything.

All of this in itself would have been a big enough blessing but when we sat with Élan and shared with him that YAH had heard his cry that HE loves him his eyes started to fill with tears. To deliver food and money is one thing but do deliver a message from YAH that HE love you and wants to have a personal relationship with you is the best gift you could ever give anyone.

As Élan and his wife thanked us we reminded them that the food we brought them, the money we gave them and even the plastic bag the food was in was not from us and that we were just the delivery boys.

When I asked Itzac if I could take his picture for a story he declined but did tell us we could take a picture of his wife and son… why? Because he said “I am just a simple Jew, I am just the messenger”