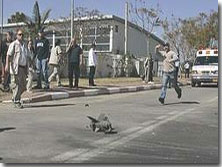 As the sun was setting and Shabbat was beginning Friday night, the peace and quite that comes with Shabbat was broken by a “Tseva Adom” as Shabbat prayer were being said. Nine Kassam rockets were fired at the western Negev

The first one on Friday came as the markets were crowed with shoppers shopping for their Shabbat meals. I too was shopping and in the check out line bagging my food As the Tseva Adom was sounded. With in seconds items and bags were dropped, money left at the register and everyone in the store was running to the protected room in the back of the store. As we stood there

counting off the fifteen seconds warning we heard the “Boom”, waited a few more seconds to see if a second rock had been fired, there wasn’t and in a few seconds we were all on our way back to what we were doing before the Tseva Adom.

Palestinian groups said the weekend rocket and mortar shell salvoes were fired in retaliation for the settler violence against Palestinians from the Hebron area, which broke out on Thursday in the wake of the IDF’s evacuation of a disputed house in the city. Settlers who were occupying the building were ordered by the state to evacuate it but had refused. Immediately upon evacuation, some of them proceeded to damage the property of Palestinians living near the house.

It was reported Friday that two weapons caches were found in the Sinai Peninsula. The report, in Falastin al Youm, said Egyptian troops uncovered two weapons caches, one of them, buried deep underground, containing more than 250 kilograms of dynamite. In another cache, 211 anti-aircraft missile shells were discovered. The weapons were in all likelihood intended for the Gaza Strip, and the smugglers who hid them in the desert were still at large.