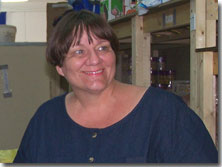 Some volunteers come to serve for week, some for months. Glory was only able to join us for one day and what a day that was. She had expressed an interest in blessing those injured by the Kassams fired by terrorists in Gaza. We sent a few e-mails back and forth and information about some of the people we help. From that list she was able to pray and decide which ones she felt she was being lead to bless; well let me have her finish the story…

“During one day this past April, 2009, I joined together with the team at Hope for Sderot for a time of outreach to the Jews in need. Sderot is a small Israeli city one mile from Gaza where Jews have lived under five years of near-daily Kassam rocket attacks from Hamas Islamic militants. Many Sderot Jews have lost arms and legs, children and homes.

It was during a recent visit to encourage the remnant of Jews in ancient Persia during Passover that God continued to speak to me from the book of Esther about bringing support to His people living under direct enemy threat.

“If you keep silent at this time, relief and deliverance shall arise for the Jews from elsewhere, but you and your father’s house will perish. And who knows but that you have come to the kingdom for such a time as this and for this very occasion”. Esther 4:14.

Initially I had hoped to bring prayers and support of $200 each to five Jewish wounded survivors of this “Haman” reign of terror. It is interesting to note that the spelling of the name of the enemy of the Jews of Sderot has not changed much in all these years: Haman is now spelled Hamas. When the team at Hope for Sderot sent me stories of some of the people in need I felt that God wanted me to trust Him to bless ten people instead of only five. As I prayed for the additional funds God showed Himself as Yahweh Yireh, the Lord our Provider.

One of the ways God delighted me while bringing relief to Sderot during Passover week was to provide a confirmation of His words to me while in Iran. It was a young man named Mordecai, a Jew from Jerusalem, whom God used to drive me to Sderot. Our God is still working, as in ancient days, to show Himself strong on behalf of His people. Sometimes he chooses the least likely people, like Esther, or me, or even perhaps you… to deliver hope to Sderot!”