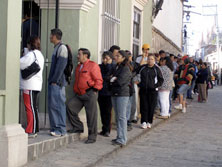 It has been pretty much quite and calm for the past year; on one hand that is good but on the other it is not so good. During the past nine years Sderot’s economy has also been hit hard with every Kassam that exploded it the town. Businesses closed, jobs were lost, and people became victims of the town’s economy as well as from Kassams.

While Sderot was under the daily bombardment of Kassams, banks were more lenient and less likely to foreclose on home loans and debt collectors were less likely to come and haul all your belongings away, but with the calm that has changed.

Director of social services in Sderot, Yigal Levy is very straightforward about the city’s current troubles. In his report he states that over 4000 families or about 16,000 people are currently being treated by social services in Sderot. Out of all applications this year alone, 40% were new applications and 20% of those were related to bank debts and foreclosure threats. The city finds itself unable to help all of the new applicants because of a drop in grant funds since the calm.

“The number of applications has risen, but our ability to address them has dropped by 50%,” Levy complained. “The government saved people from the Kassams, but now no one really cares.” Sderot’s indebted residents feel virtually helpless.

“Suddenly when it’s calm and there are no more Kassams, they’ve threatened to take away my house. During the operation everyone was considerate.” explains one resident. “As long as the operation lasted no one approached me and I could live in peace, at least in that respect. My debt isn’t that high, I’m trying to pay it off and still they threatened to evict me…I always felt that we were abandoned here, but now I feel it even more,” he went on to say.
“Sometimes I think, to hell with it – bring on the Kassams. It’ll solve my problems with the bank and I’ll get to keep the roof over my head one resident said. The rockets might have stopped but the effects from years of Kassam rocket attacks are still being felt.

How long will it take until the people of Sderot can actually get back on their feet, how long will this calm continue, have we forgotten the people of Sderot now that it is quite? The people are still in need of help to get them back on their feet and we are at our limit to help, the city is at their limit. Our waiting list is now 87 names long and we hope and pray for a miracle so we can help them.