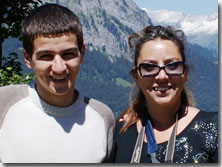 We still have not been able to visit Matan in the hospital. We were told maybe in two weeks. Marko, the guard at Matan’s school and the one that makes the sandwiches each day for the school kids, got a call from Matan asking if Marko would bring his buddy that was injured by the same Kassam he was. Marko told us that Matan met him at the entrance to the hospital and was zipping around in his wheel chair… He was in good spirits. Matan will remain in the hospital for a total of three month to insure proper healing and to get used to his new prostheses.

Matan’s desire to serve in the IDF may also become a reality as the IDF is looking into designing jobs for those with disabilities, freeing others up to serve elsewhere. I look forward to the day we publish a picture of Matan in an IDF uniform.

We had a chance to visit Ruti in her home on Friday. When she came to unlock the door in her wheel chair, I told her I had driven by earlier but I did not see her car so I thought I would just stop and drop off the things we had for her. I asked her how her day was going and she said it was OK. I asked her “well then how was your yesterday. She said she had to go to Ashkelon for an ultra-sound. With that, her countenance changed… “I am pregnant and I got to see my daughter for the first time and she is beautiful!” No names have been picked out yet but she only has four months to pick one out; the baby is due in July. Once again the L-RD has heard the cry of a mother and has blessed. He has turned weeping into tears of Joy. If you would like to bless mom and her new daughter we would love to pass your love on to them.