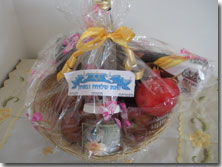 Rosh HaShanah is the Jewish New Year. It falls during the month of Tishrei (September) and occurs ten days before Yom Kippur ( The Day of Atonement). Together, Rosh HaShanah and Yom Kippur are known as the Yamim Nora’im, which means the “Days of Awe” in Hebrew. In English they are often referred to as the High Holy Days.
Rosh HaShanah literally means “Head of the Year” in Hebrew. It falls in the month of Tishrei, which is the seventh month on the Hebrew calendar. The reason for this is because the Hebrew calendar begins with the month of Nissan (when it’s believed the Jews were freed from slavery in Egypt) but the month of Tishrei is believed to be the month in which God created the world. Hence, another way to think about Rosh HaShanah is as the birthday of the world.
Rosh HaShanah is observed on the first two days of Tishrei. Jewish tradition teaches that during the High Holy Days God decides who will live and who will die during the coming year. As a result, during Rosh HaShanah and Yom Kippur (and in the days leading up to them) Jews embark upon the serious task of examining their lives and repenting for any wrongs they have committed during the previous year. This process of repentance is called teshuvah. Jews are encouraged to make amends with anyone they have wronged and to make plans for improving during the coming year. In this way, Rosh HaShanah is all about making peace in the community and striving to be a better person.
Even though the theme of Rosh HaShanah is life and death, it is a holiday filled with hope for the New Year. Jews believe that God is compassionate and just, and that God will accept their prayers for forgiveness.
The Rosh HaShanah prayer service is one of the longest of the year. Only the Yom Kippur service is longer. One of the prayer during the Rosh HaShanah prayer service is the Avienu Malkeinu, which means “Our Father Our King” in Hebrew. Usually the entire congregation will sing the last verse of this prayer in unison, which says: “Our Father, our King, answer us as though we have no deed to plead our cause, save us with mercy and loving-kindness.”
… 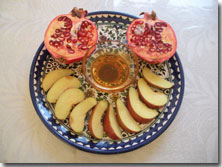 Celebrating Rosh HaShanah include apples, honey and round loaves of challah. Apple slices dipped in honey represent our hope for a sweet new year and are traditionally accompanied by a short prayer before eating that goes: “May it by Thy will, O Lord, Our God, to grant us a year that is good and sweet.” Pomegranates are eaten because Israel is often praised for its pomegranates and because, according to legend, pomegranates contain 613 seeds – one for each of the 613 mitzvot. Another reason for eating pomegranates on Rosh HaShanah has to do with the symbolic hope that our good deeds in the coming year will be as many as the seeds of the fruit.
Some people choose to send New Year’s greeting cards or give gifts and that is what Hope For Sderot will do next week. On Tuesday our volunteers and the fifteen volunteers from H.O.T cable will pack and deliver two hundred baskets with apples, honey, grape juice, a honey cake and of course a Pomegranate.
To all of our supporters and those who receive our news letters, may this coming year be filled with blessing even grater than the seeds in the Pomegranate.
“For I know the thoughts that I think toward you, says the L-RD, thoughts of peace and not of evil, to give you a future and a hope.”
Jeremiah 29:11