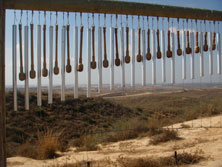 (Editors Note: while writing this story 3 more Kassams have been fired from Gaza)

The Israeli military carried out air strikes on Gaza Sunday as well as on Monday, in the retaliation of the killing of 21 year old IDF soldier St-Sgt. Netanel Moshiashvili, who was killed on Friday morning in a clash with a Palestinian gunman who had infiltrated Israel from the Gaza Strip.

Since then two rockets have been fired from Gaza terrorists into Sderot. Where will this lead? We will keep you posted.

This escalation comes a week after a Palestinian sniper in the same central-Gaza area shot and wounded two soldiers. The fears were that the terrorist had also considering the possibility that the terrorist’s objective was to kidnap a soldier. Since the beginning of this year, Palestinian militants have fired over 270 rockets at southern Israel, according to army resources.

At kibbutz Nir Am there is a wonderful picnic area and a set of wind chimes. The wind chimes are a memorial to a 21 year old soldier who was born and raised on kibbutz Nir Am and who was killed in a helicopter crash. The “soldier’s park” is a memorial to the soldiers that were killed during maneuvers against Gaza militants in the 1950’s. They tell me the park is an M-16 bullet shot away from the Gaza border.

On Friday afternoon just before Shabbat, the park is a very lovely and quite place to welcome in Shabbat. It is not uncommon for us to head to the park around 3:30 with the BBQ and do a late lunch and cook enough for Shabbat as well. Often times the IDF paroles are in the park or will come and go while we are there. We always try to have an extra plate or two or ten and sometimes they will stop by for a bite or a cold drink.

With the death of St.-Sgt. Netanel Moshiashvili near the very place we celebrate and welcome in Shabbat it is a startling reminder of where we live and the danger we live with day in and day out.