You won’t actually ever be able to me Ayala-Haya in person; in fact the only way you will ever be able to meet her will by reading this article or any other article that has been written about she… She was killed Jan 21, 2005 by a terrorist rocket attack.

Ayala was killed on a happy day, a family reunion, and the birthday of one of her nieces. Ayala acted as the guardian of her younger brother from the outset of the Palestinian Qassam rocket attacks. She accompanied him everywhere, slept alongside him, waited outside the bathroom for him and went with him to the computer on the second floor of the family’s home.

They both dropped to the ground out in the open, trying to stay as low as possible, (just as we have all been instructed to do in a situation like that). Ayala-Haya shielded her 10 year old brother with her body. Tamir escaped with minor wounds from the Kassam that landed next to them, Ayala-Haya taking the full impact of the Kassam was fatally wounded. 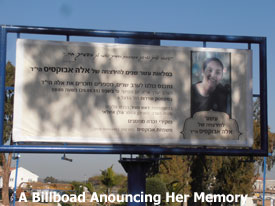 Thousands attended her funeral, where her father read a note Ayala-Haya had penned shortly before her death: “Sometimes we tend to forget that life will be over one day, and we don’t know when that day will come, and praise is always voiced too late, so in order for that not to happen, I’ve chosen to tell you what a wonderful person you are. Tell people that you love them and care about them.”

Ayala-Haya was a good big sister, a wonderful little sister and a loving daughter and she didn’t think twice to protect her younger brother, who today because of her love and concern for him is a married man today.

Just recently the family and the community held the memory of Ayala-Haya. Her parents live with her loss every day and have vowed never to let her story die. I guess you could say that her death has become her parent’s life.