In spite of the current cease fire rockets continue to fall on Israel from terrorists in the Gaza strip. When you read that a rocket landed and did no damage that is not a true and correct assessment. With every ‘Tseva Adom” alarm that sounds old emotional wounds are reopened and that adrenalin rush of fear races through your body one more time. For some the nightmare of “Tseva Adom” and the results of the accompanying rocket never ends.. 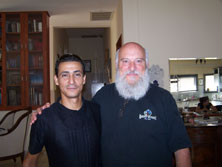 I recently went to visit my friend Koby. I have known him for almost four years now. The first time I met him was in April 2008 at a BBQ. He was instrumental in the early days of Hope For Sderot as we got thing going and off the ground.

He knew the where’s and why’s to getting things started and knew what those who were injured by Kassam rockets were going through, you see he was a victim of a Kassam rocket attack himself.

He walks today with the aid of a cane and is able to get out and about. His legs take him where he needs to go but there are scars that will never go away and long lasting effect that plague him even to this day.

On January 6, 2006 Koby was at work. He was sent to pick up some documents at a IDF base near the Karni crossing. While he was there he heard an explosion which had hit the building next to where he was. He reasoned that there might be other rockets on the way and left the building he was in for the bomb shelter.