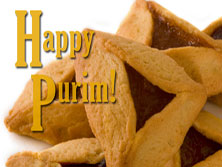 We celebrate Purim at sunset this coming Saturday evening the 27th of February. The book of Esther tells the story of Purim. The main players in the story are G-D although His name is never mentioned in the book, Queen Esther, Mordecai and of course Haman.

The celebration commemorated the victory over oppressors of the Jewish people. Esther is a beautiful Jewish woman who married the king of Persia, King Ahasuerus, after winning a beauty contest. The king loved Esther more than any of his other women and made her his Queen. He was not aware that Esther was a Jew, for Mordecai, her uncle a Jewish leader, had advised her to not to reveal her true identity.

Haman, the villain of the story, (His name can be replaced with any number of people in today news), was the king’s prime minister. He hated Mordecai, because Mordecai was a Jew and would not bow down before him. Haman convinces King Ahasuerus that it would be in the best interest of his kingdom if the Jews were killed, (sounds a lot like talk that comes right out of today’s news.)

The king gave Haman permission to deal with the Jews as he saw fit, so Haman made plans to massacre the Persian Jews. He cast lots to determine the day, it fell on 13 Adar.

Mordecai convinced Esther to speak to the king on the behalf of her people, which would require her to appear before him without being summoned, a crime punishable by death in those days. She fasted for three days prior to the meeting. To make a slightly longer story short, King Ahasuerus welcomed her, listened to her story, and was outraged by what he heard. He had Haman hanged on the gallows that had been intended for Mordecai, and appointed Mordecai as prime minister in Haman’s place.

The king officially decreed the massacre the Jews could not be rescinded, and it could not be stopped. But he allowed the Jews to fight to defend themselves. Needless to say the Jews prevailed.

The Jews established and imposed upon themselves and their descendants and all who would join them, that without fail all should celebrate these two days every year, according to the written instructions and according to the prescribed time, “that these days should be remembered and kept throughout every generation, every family, every province, and every city, that these days of Purim should not fail to be observed among the Jews, and that the memory of them should not perish among their descendants.”

In reality Purim is a day to remember and celebrate the faithfulness of G-D, even to an unfaithful people. That should be encouraging to us as we take the time, make the celebration and remember His faithfulness! The Haman’s of this world will never succeed… why… because G-D said…