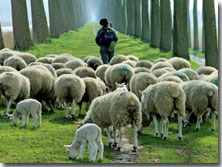 “But You, O Lord, are a God full of compassion, and gracious, Longsuffering and abundant in mercy and truth.”

Although G-D is all this and more, it does not give me license; it does not allow you to do what ever we want as we take His kindness towards us for granted.

The last year and a half before I moved to Israel I moved back home with my mom. I was blessed to spend time with her before she passed away.

She was eighty four at the time and I was fifty four and you know when mom said “ Please take out the trash” I knew it was time to take out the trash. There were always rules in my house as I was growing up and I realized it made no difference whether I was four, fourteen or fifty four, that as long as I wanted to live under her roof I had to obey her rules. (Don’t get me wrong for a second… she was the BEST mom G-D ever created!)

Just like with my mom, G-D, my heavenly Father has house rules and as long as I live under His roof I need to obey His rules. Most defiantly He IS a G-D full of compassion, and gracious, Longsuffering and abundant in mercy and truth But He will not let me go undisciplined any more than you will let your kids go undisciplined; not because He is mad at me but rather because He loves me and wants the very best for me, for you.

Look at the children of Israel… G-D was and still is a G-D full of compassion, and gracious, Longsuffering and abundant in mercy and truth. He is also a G-D of justice and righteousness. He is not going to bend the rules for us. He will however give us chance after chance after chance after chance to repent, to turn from our wicked ways. Today, if you will hear His voice “Do not harden your hearts, do not take His loving attributes for granted as the children of Israel did in the rebellion, As in the day of trial in the wilderness. When your fathers tested Me; They tried Me, though they saw My work. For forty years I was grieved with that generation, And said, ‘It is a people who go astray in their hearts, And they do not know My ways.’ I So I swore in My wrath, ‘They shall not enter My rest.’”

Isn’t it time we enter His rest?