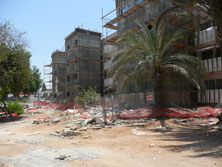 One nation under G-D! Or so that is what the founding fathers of America said in their declaration of faith, their mission statement as it would be; The Declaration of Independence. They knew if G-D was not at the center of this country there would be problems. They knew the importance for a man to believe and worship G-D. They believed in the freedom of religion and believed the government should not start its own state run religion or interfere with your freedom of choice, to believe as you pleased.

It is a given that Israel has been one nation under G-D from the twelfth chapter of Genesis. We have read about the problems she had gone through because of disobedience to her G-D. Today she still suffers from those decisions, yet G-D has never abandoned her or given up on her, she just needs to learn her lessons, repent and come back to her
G-D, who loves her. I think America is also in the same boat.

In 1962 prayer was voted out of public schools by the US Supreme Court. In 1997 the Ten Commandments were ordered to be taken down from a court house because they are a religious symbol and they might influence a juror if they were to read them. Today you hear the constant cry of “separation of church and state.” Maybe we have mixed up the difference between “church and state” and “G-D and state.” Little by little the U.S. has pushed G-D away. G-D is a gentleman and will never force Himself on anyone or any nation. Have we forgotten who the designer and builder of our country is?

You can only say to G-D for so long, “Leave” and He will. Israel knows that all too well when through continued disobedience the Shekinah, the glory of G-D left the temple. How she longs for those days again. Let me liken the departure of His Glory, whether to Israel or the U.S. like this…

You live in a house in the desert that has air conditioning and one day it goes out. In the morning it seems ok because you still have the cool from the evening. As the morning begins to turn to noon and the sun comes up, you begin to sweat, you start to miss what you had, but it’s gone.

Instead of trying to fix the problem, to repent as a nation, and return to G-D, we go out and buy a fan. It’s not as good as the AC but as time goes on we make do with what we have and look back fondly on what we once had. Both countries are sweating a lot more today than ever!

How long can the U.S. go on pressuring Israel into giving up land for peace without feeling the repercussions of G-D’s displeasure? Zachariah tells us “he who touches Israel touches the apple of His eye.”

If you keep track of the news and the daily political pressure placed on Israel by the U.S to divide Israel, you can’t help to believe there will be a reaction because you have touched the apple of G-D’S eye.

With pressure from the U.S., Israel moved out of southern Lebanon and Hezbollah moved in. That was the year of the drought and heat wave that set off a seven million acre fire costing 6.3 billion dollars. Israel moved its citizens out of Gaza and Hamas moved in. As Jews were being evicted from their homes Hurricane Katrina evicted over one million people from their homes, costing over 90 billion dollars.

In addition, there have been more weapons smuggled into Gaza since 2007 then in the previous thirty years. These are just two examples, do your homework, you will be surprised.

In the past, the U.S. has been a friend of Israel and I believe that is why it has been blessed over and over again, after all G-D promised “I will bless those who bless you and curse those that curse you.”

“Such being the impressions under which I have, in obedience to the public summons, repaired to the present station, it would be peculiarly improper to omit in this first official act my fervent supplications to that Almighty Being who rules over the universe, who presides in the councils of nations, and whose providential aids can supply every human defect, that His benediction may consecrate to the liberties and happiness of the people of the United States a Government instituted by themselves for these essential purposes, and may enable every instrument employed in its administration to execute with success the functions allotted to his charge. In tendering this homage to the Great Author of every public and private good, I assure myself that it expresses your sentiments not less than my own, nor those of my fellow-citizens at large less than either. No people can be bound to acknowledge and adore the Invisible Hand which conducts the affairs of men more than those of the United States.” George Washington; First Inaugural Speech … (April 30, 1789)