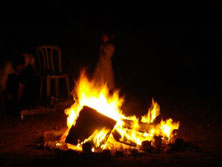 These six things the L-RD hates, Yes, seven are an abomination to Him: A proud look, A lying tongue, Hands that shed innocent blood, A heart that devises wicked plans, Feet that are swift in running to evil, A false witness who speaks lies, And one who sows discord among brethren.

Lag Ba Omer is a rabbinical holiday that is found within the biblical command to count
the days between Passover and Shavu’ot or The Feast of First Fruits.

You shall count for yourselves seven weeks, from when the sickle is first put to the standing crop shall you begin counting seven weeks. Then you will observe the Festival of Shavu’ot for the L-RD, your G-d Deuteronomy 16:9-10

According to Torah, Jews are obligated to count the days from Passover to Shavu’ot. This period is known as the Counting of the Omer (in Hebrew, S’firat Ha-Omer). An omer is a unit of measure. On the second day of Passover, in the days of the Temple, an omer of barley was cut down and brought to the Temple as an offering. This grain offering was referred to as the Omer.

Rabbi Akiva a first century rabbi had a yeshiva or a school of Torah, a bible college if you would. He had 24,000 students in his school. Due to a lack of respect one for another, backbiting and gossiping about each other, the tradition says a divine plague hit the yeshiva. When the plague was lifted, 24,000 of his students were dead, leaving only five left for him to teach.

This period of counting is a time of partial mourning, during which weddings, parties, and dinners with dancing are not conducted, in memory of the plague during the lifetime of Rabbi Akiba. Haircuts and shaving during this time are also forbidden.

The 33rd day of the Omer commemorates the break in the plague. The holiday is known as Lag b’Omer. The mourning practices of the omer period are lifted on that date. The word “Lag” is not a word; it is the number 33 in Hebrew. Lag b’Omer, or the 33 of Omer is similar to how we would refer to Independence Day as, “the Fourth of July.” Bonfires that are set all over in celebration of the lifting of the plaque are used to barbeque food for the celebration.

Although Lag b’Omer is not a biblical holiday it is a stark reminder that we hold the power of life and death in our tongue.