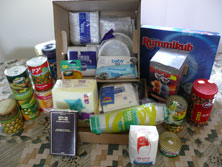 We were blessed recently with three different boxes of supplies, a box of first aid supplies for our “War Boxes” from our friends in Paso Robles California, A box with sixteen pairs of Children’s shoes from a friend in Kentucky and tooth brushes from our friends Florida. Thank you to all of you from the bottom of our hearts!

As we continue to collect the needed items to put in the “War Boxes” a new sense of urgency grips us. The majority of the food items we need are on hand and in our moxson. Our first aid kits and basic items like paper goods, flash lights, can openers battery operated radios, gas cook stoves still have a ways to go still. You can see a list of our current needs by clicking here.

I say a new sense of urgency because as some of you my know the Palestinian authorities living in the West Bank under the leader ship of Mahmoud Abbas in September will petition the United Nations general assembly, asking that the UN to recognize a Palestinian state.

Mahmoud Abbas presently has the support he needs to have a vote in favor of such motion. What will that mean for Israel? It is a no win situation for Israel. The moment the UN passes such a measure the west bank will erupt with demands for their right to what they perceive to be their land.

The rest of the world will yell a little louder about “Israel the occupiers” and you can expect to see more violence between Palestinians and the rightful settlers on their G-D given land.

To make things worse the precedent has been set by the UN in Libya to seal off a sovereign nations air space, enforcing a “No Fly Zone”, there by taking away the right of to fly in its own air space. This is not about the situation Libya, but rather a precedent that has been set and could very well be forced upon Israel and Israel losing the power to defend its people from a potential wave of rockets from every side.

In his latest maneuver Mahmoud Abbas has gone around the terms set in the Oslo Accord and avoids the “negotiation” process between the two parties as stated in the Accord. In response to this there is already talk that if this happens Israel will annex the major settlements and the situation will only get worst and bloodier from there.

It looks like we now have a September target date to have our War Boxes completed. We still have a ways to go and could use some help. We are presently preparing only enough to help those here in Sderot that we presently help on weekly bases… those who really don’t have the means to prepare for the future on their income.

I can say that with first hand knowledge of those we serve on weekly bases. After paying rent, electric, gas, water and medication they have less than $350 a month to feed and cloth a family of three. There is no way a single mother can buy what she would need to get her and her two kids through the first week of a war, especially when she doesn’t have enough to get through the month as it is now.
If you can help, if you want to help, no matter how small, now would be the time. The clock is ticking and the wheels are being set in motion for the UN to once again to come against Israel by giving her G-D given land away.