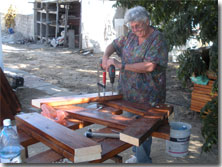 We have continued to cut, stain and preassemble parts for the eight picnic tables for Afek’s park this week. By Thursday night they were completed and are now awaiting the arrival of the team from the Almond Branch Initiative to assemble them. The material for the three pergolas has been ordered and will be ready to be picked up after Yom Kippur. Next week, we also hope to start digging the footings for the pergolas and for the picnic table anchors.

We made a trip to the nursery to look at plants we hope to be able to plant in the “Hope Garden” on Thursday. There are many beautiful plants to choose from. If you would like to bless Ruti in this way please click here for more information.
. 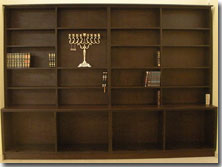 Rabbi Pizem was happy with the way the three bookcases we built for him turned out. It was a labor of love for a friend, built unto the glory of G-D. May the L-RD fill the shelves with His word. Phase two of the bookcase project will be putting the doors on the base cabinets, but that will be a ways down the road. For now they will be used just the way they are.
We were able to supply the labor to build the bookcases and Rabbi Pizem was able to supply the material. We worked together in order to accomplish something neither one of us could have done on our own.
.

The soldiers unit project we told you about last week also has some news to report. This week the Hope For Sderot volunteers decided to go over to the toy store just down the street from us to ask if they were willing to help with anything, maybe a game or two. They were given five new games. Being encouraged by this they then went next door to the hardware store where they received a new fan. As they made their way down the street they received something from each of the merchants, even the flower store gave a silk flower arrangement.

The interesting thing about this act of kindness is; these are the very same people whose businesses have suffered for the past nine years as Kassams fall, people move away, factories relocate and people loose their jobs. We received a donation to cover six of the one hundred and twenty soldiers with their winter clothing. If you would like to be part of this project, you can click here. 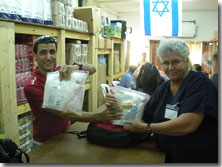 When Linda first started talking with us about coming to Sderot to serve she also wanted to bring some first aid kits to give to the people here as well. With the funding from her church and the help of their woman’s group they supplied and packaged seventy-nine first aid kits. That comes out to be three big suit cases weighing in at one hundred and seventy five pounds of bandages, hot and cold packs, antibiotic, tape, gauze and the list goes on. To her church, to the ladies who packed them and to Linda for schlepping them from Paso Robles, California to Sderot via LAX THANK YOU!
.
.