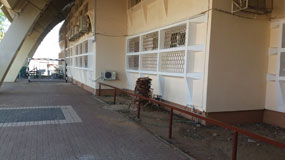 Once again we found ourselves at the school painting. We were asked if we could just touch up a few areas outside where the condensation from air conditioners caused some water damage. We agreed to make the repairs but as we began to work we realized the repairs were a bit more extensive.

We spent several days repairing and prepping the wall, making them ready for paint. We were once again allowed to use our imagination in choosing a color scheme. We chose to use three colors while still keeping the base color close to the original color. 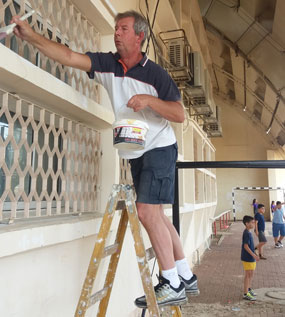 The only challenge we faced while painting were the times the children were outside playing. Soccer is the game of choice for most of the boys.

Even at a young age they can kick that ball pretty hard, but not that accurate sometimes! While Arve was up on the ladder they hit him twice and they put one soccer ball right into my full paint tray!

More than one child went home with paint on their hands, in spite of the warnings by us and the teachers that there was “wet paint”.

The greatest joy of this job was meeting Arve. He came with a heart to help and he was not afraid of work or to get his hands dirty. He was a joy to work with and he helped to make quick work of the job.

The school got a wonderful paint job, but I think I was the biggest winner, because we made a new friend… Thank you Arve for your help, but more so for your friendship!