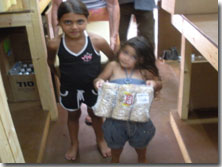 Hope for Sderot has had a wonderful bunch of volunteers from the very beginning. Whenever we needed help to pack food, distribute food or unload trucks they have always been there. So when we got the phone call Sunday afternoon that our shipment of food would be delivered in two hours we made the usual phone calls. Only to find out two were in Tel Aviv, one was home sick with his wife, another was having surgery so both he and his wife we unavailable and the other two are on crutches… that left only one to unload the truck… all six pallets… But that is when the “B” team showed up!

Kobi (one of the two on crutches) showed up with his three kids, ranging in age from three to nine and a neighbors eight year old son. Then Yafeem (the other on crutches) showed up with his wife. At first I thought this will never work, until the kids started dragging in forty eight count packages of toilet paper. One product after another, they brought them in as I stocked the shelves.

Three year old Lin could only carry two bags of sugar at a time while Agm and Liel each took an end to a ten pack. You could see the pain in Yafeem’s face as he carried the cases of tomatoes. Moti, the one home sick came in with his wife to help as well. Before we knew it, everything was put away. Later that day, I got a phone call from Eti apologizing for not being able to help.

There is something to be said about dedication on this level and a willingness of kids to help when you are in a pinch, keeping in mind that no one gets paid a penny, we are all volunteers. This is the Family G-D has put together here in Sderot. People helping people.