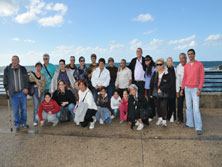 The past few weeks have been full to say the least. Preparations for Hanukah has been at the top of the list, with preparations for our trip to Acco number two, and picking up free produce, packing food baskets and distributing them all taking their place on the list of things to do.

We have been able from time to time to acquire a bus and load it up with those who have been injured by Kassam rocket attacks and take them on a day trip to places here in Israel. For some, these trips have been their first time to the site. This being the third such trip we left Sderot in the rain (Baruch Ha’shem) at seven in the morning and headed up north. It rained most of the way, again Baruch Ha’Shem, for we so desperately need the rain.

By the time we reached our first destination of the day, we were in Old Acco. At the Info Center we watched a brief video of the history of Acco and then with a walk through the Enchanted Garden, we were on our way to tour of The Hospitaller Fortress. From there we made our way through the old city and all of its open air shops and ended up at the Mediterranean Sea and the port of Acco.
Our second stop was at The Ghetto Fighters’ House – Itzhak Katzenelson Holocaust and Jewish Resistance Heritage Museum. It was founded in 1949 by a community of Holocaust survivors, members of the Jewish underground from the ghettos of Poland, and veterans of partisan units. But before we started our tour we had a wonderful lunch at the Kibbutz.

After lunch we toured the Yad LaYeled Children’s Museum which is a picture and video venue of stories of children that were killed in the Nazi death camps. For those of you that have ever been to Yad Va’Shem you have an idea of what this children’s museum is like.

From there we once again boarded the bus… next stop… Rosh HaNikra. Rosh HaNikra is a cliff at the sea, right at the northern border of Israel towards Lebanon. The name means “head of the cave”. We reached the entrance of the caves by taking a cable car down the face of the cliffs to the numerous and impressive sea caves at the foot of the cliff.

Some of us ventured into the caves only to be met by crashing waves that left some of us wet, I mean really wet! Had I known I was going to take a shower I would have brought some shampoo!

In spite of the squishy shoes and the wet socks we all had a wonderful time, and that cup of hot chocolate we had at the end of the day took our minds off the wet feet and legs and backs. On the way home, we made a quick pit stop and took out the ice chest, a small propane stove, heated up some water and munched on some hot dogs. That was just enough food to satisfy until we arrived home around 8:30 that night.

It was a full day for us all and a very enjoyable one as well. We are thankful that Ha’Shem made it all possible. He gave us rain in the morning, good weather for our trip and as we arrived home and were getting off the bus, He blessed us with even more rain.