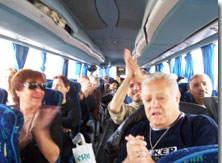 The past three weeks have been hard on us here in Sderot. Not because of Kassams but because of illness. Four of us have been sick since the eighth of March. Stewart was the first to get sick with a lung infection, Moti was rushed to the hospital a day later, Bobbi Anne got sick on Sunday with the same infection and Jonathan was admitted to the hospital with ongoing stomach problem from his Kassam injury.

Moti was been released from the hospital a few days ago as was Jonathan. Bobbi Anne and Stewart are finished with the antibiotics

and getting a little stronger each day and returned to work this week.

In spite of being short handed Kobi, Eti, Merium and Dallia picked up the slack and prepared the food for distribution; they also received our Pesach food order. On Monday, they came in at six thirty in the morning, along with Marko and made sixty sandwiches for our outing to En Gedi.

The day trip to En Gedi was a wonderful time for all who attended. We left Sderot at eighty thirty Monday morning. The bus was full with people, laughter and singing. It seems our bus driver not only drove us to where we needed to go but kept everyone on the bus entertained with jokes and stories, songs and sing-a-longs as well.

We arrived in En Gedi at noon as spent some time at the botanical gardens at Kibbutz En Gedi. It was hard for some to make the walk, but they all said it was well worth it. By noon, we made our way to the spa for lunch, a time to float in the Dead Sea and a time to soak in the mineral pools.

At three o’clock, we left En Gedi for Jerusalem and the Kotel (Western Wall). It was a rich and rewarding time to see the men of Sderot come together as one as we prayed at the Kotel. As the men were praying the woman were doing the same on the woman’s side as well.

We stopped in Latrun to eat our sandwiches we had made and by nine o’clock we were back in Sderot. It was a full day, a long day. It was a day of peace and relaxation, of singing and laughing.  It was a day we had hoped it would be for the victims of eight years of terror. A good time was had by all and we were asked when we could do it again. For those of you who support us and help with projects like this… Thank you. Most of all we thank the L-RD for His provision and gentle hand of guidance as we make plans and follow His leading. To G-D be the glory, great things He has done.