As rockets continue to rain down on Israel; I can no longer write about Sderot or the citie’s that surround Gaza but now all of Israel is a target. Sderot may not be getting the brunt of the current rocket fire but we still a target and getting hit too. 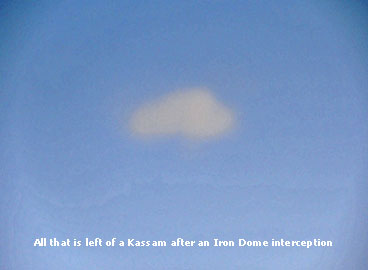 I cannot speak about the conditions in other city’s who are now being targeted but I have to believe that they are experiencing the same anxiety that we have been feeling here for the past 12 years.

The past 12 years of terrorist attacks have afforded us one advantage over all of the citys that are now targets, and that is; The government has spent billions of shekels to provide ever apartment and home with a bomb shelter. This gives us the ability to seek cover within the fifteen seconds we have before a Kassam impact if we are home.

While one bomb shelter withstood a direct hit last week and another bomb shelter did indeed protect another family as their apartment was struck by a Kassam, our bomb shelter are proving themselves to be life savers.

The bomb shelters also give us a save room to spend those nervous hours and to let our anxiety wind down a bit. Through the generosity of different organizations around the world, Sderot has fortified bomb shelters as bus stops throughout the city, yet there are many places where the closest protection is more than a fifteen second dash away. This is problematic for the disabled and the elderly of Sderot. 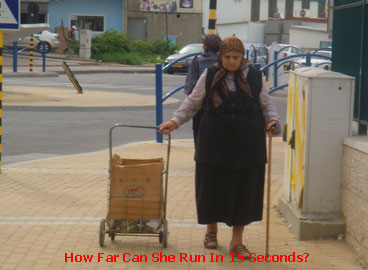 Sderot has a large elderly Russian population and it is not uncommon to see them out and about with their walkers or canes or sitting in the cool of the evening in their little groups.

We also have the elderly that have part time caregivers that take them outside for some sunshine and exercise; but when you can only take a six inch step at a time how far can you travel in fifteen minutes no less than in fifteen seconds when the Tseva Adom alarm sounds?

At the time this article  was written over 690 Mortars, Kassams, Grad or the new Fajr-5 have been fired at us. The sound of IAF jets is becoming a common sound as is the artillery fire aimed at Gaza. The sound of “Tseva Adom” alarms via our cell phones seems to be going off non stopped as it notifies us of the rocket attacks on other cities in Israel.

You can download the same “Tsava Adom” app for your cell phone if you like by clicking on this link app named Tzeva Adom. It will give you a different perspective of what we are living with.

We still need your support and prayers. If you can support us you can do so by clicking here. If you not able at this time to help with support please say a prayer for us prayers cost nothing, just a little of your time but they can move mountains and more important Hearts. Toda Raba.