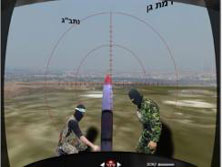 By: Noam Bedein
Director of The Sderot Media Center

Noam Bedein, Director of The Sderot Media Center, has issued a call to mainstream media from the citizens of Sderot. Arutz Sheva has decided to publish it for our readers and hopefully, the mainstream media to whom it is addressed. A video, click here, shows children panicking to run for bomb shelters as a Kassam rocket approaches.

Sderot Call on the Mainstream Media:

We ask you respectfully to change the way you report the continued rocket fire on Israel from Gaza.

Seven rockets, missiles and mortars have been launched from Gaza towards the western Negev’s communities over the last few days.

The disproportional coverage of these rocket launchings and explosions is found in a dry, terse report on mainstream media that takes a few seconds of news time. The issue is barely mentioned by the msm, who state (luckily so far) only that there were no injuries and no damage to property. That is not really the case, as anyone who lives in constant dread of the next missile knows well.

We ask that you change your reports to the following:

1.If there are no injuries, it is important to stress that there were no physical injuries reported.There surely are mental injuries, even though we will not let the terrorists change our lives.

2. It is crucial to mention each time how many rockets have been launched against Israel since the last ceasefire of January 18, 2009.

As of today July 15th 2011, there have been 788 rocket launchings from Gaza aimed at the southern residents of Israel. This has to be brought home again and again so the world will know.

We have decided to write this open letter to all the mainstream media and ask for a change in awareness of the significance and after-effects of this constant bombardment of people trying to live normal lives in an area that has never been disputed even by the UN, that is, unless the very existence of the State of Israel is in dispute.

Editors Note: In this article written by Noam Bedein, he states “ The latest statistics from Natal, the organization dealing with post-traumatic stress, show that 70% of the children of Sderot suffer from symptoms of post-traumatic stress two and a half years after the Cast Lead Operation and a full third of Sderot’s residents feel constant post-traumatic anxiety.”

In as much as the constant threat of rocket attacks exist today I would disagree with the Natal statement about “post-traumatic stress” there is nothing POST about it. It has been and is an ongoing terror attack. Its like being a prisoner of war… some days they beat you other days they leave you alone. You know at any minute that door to your cell can open and you know what is coming next.