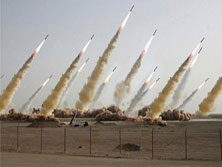 As we begin this New Year, we change our calendars, we set up new books for accounting, and we even make a few New Year resolutions. We hope that the coming year will be better than last year and we start the new year off with new hope and expectations. We look forward to a year of peace, where soldiers can come home. So with these hopes we begin this New Year… but…

The news in Israel is everything but promising for peace. Peace is a word used by the United Nation, and by all the government leaders around the world that are trying to establish peace here in the Middle East, especially between Israel and her neighbors.

When you read statements in the news like, “In a long, defiant speech on Monday afternoon, Hamas Prime Minister Ismail Haniyeh said that gaining control of the Gaza Strip was ‘just a step toward liberating all of Palestine, brothers and sisters, we will not be satisfied with Gaza,” he declared. ‘Hamas looks toward the whole of Palestine.’” It can only mean one thing…

When Haniyeh gets up and says, “We have overcome the occupation, and will meet at the Aksa Mosque in Jerusalem, which will remain Arab and Muslim.” He is not talking about a peaceful New Year.

In this past year Hamas has spent its time, money, and efforts not in the rebuilding of the Gaza infrastructure, or helping those who are still homeless after operation “Cast Lead” but rather preparing for “Cast Lead 2.” They now possess rockets that can travel 60 kilometers, which means they can now hit Tel Aviv and Beer Sheva with no problem. In addition to the weapons and personnel they have smuggled into Gaza, Hamas also possesses a substantial arsenal of 122-mm Grad rockets, anti-tank missiles, anti-aircraft missiles and machine guns, patrol boats and explosives.

Today, there are approximately 20,000 armed operatives in Gaza who answer directly to Hamas or can be integrated into its forces in an emergency. This is a large guerrilla army that has well-trained forces deployed throughout the entire Gaza Strip. These fighters often undergo training in Iran and Syria, and then return to Gaza — either through an extensive network of tunnels or overland through the Rafah crossing, exploiting the weakness of the Egyptian security forces that are supposed to prevent such cross-border smuggling.

Peace on earth, good will towards man, sad to say I don’t see it happening in this New Year. Oh sure I may loose those extra pounds I have resolved to loose and you may finally get the garage organized or your closet straightened up but Hamas will continue its quest to “wipe Israel off the face of the map.”