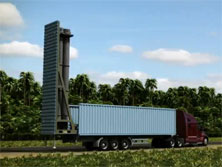 A new cruise-missile system being marketed by a Russian firm is attracting attention as a weapon that, according to its own promotional video, could transform ordinary civilian freight vehicles, trains and container ships into long-range missile launchers.

The weapon, known as the Club-K Container Missile System is a concealed and highly mobile satellite-guided missile system that is hidden inside an ordinary cargo container — making it indistinguishable from other freight containers on trains, trucks, or cargo ships.

The development of this missile system has raised fears in the West that Russian missiles might become a weapon for terrorists if they fall into the hands of groups like Al-Qaeda. The Russian firm’s marketing campaign appears to be aimed at countries like Iran and Venezuela, which have expressed concerns about the presence of U.S. military bases or troops deployed in neighboring countries.

This relatively cheap, extra-smart, easy-to-use Club-K Container Missile System, which Moscow has put on the open market, allows cruise missiles concealed in freight containers to be launched from a prepositioned or moving land or sea platform. It is virtually undetectable by radar until activated. No wonder, Iran and Venezuela were keenly interested when the Club-K was put on the market at the Defense Services Asia exhibition in Malaysia for $15 million.

Western military experts are calling it a “real maritime fear for anyone with a waterfront.” The Club-K container, carried by a ship, fishing vessel or truck can approach a targeted coast, highway or international railway and strike behind the target’s missile defenses without alerting radar monitors or even surveillance drones and satellites.

The system’s manufacturer, Novator, is directing its marketing tactics at anyone under threat of military action from the United States. One expert accused the Russians of proliferating ballistic missiles on an unheard-of scale.