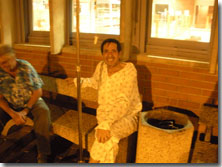 We shared about Moti in last week’s news letter and that how on Monday he was rushed to the hospital with stomach pains. They ran some tests to find that there is a blockage that is not allowing him to digest his food. They are still trying to determine what the blockage is. We have heard everything from an infection, to a tumor, to cancer. When we visited him Tuesday evening he was not the Moti I know. I actually felt like the next time I would see him would be at the cemetery, he looked that bad. We were only able to see him for a few minutes before he had to go back to his room with the help of his wife.

We visited him again of Thursday evening and as we walked up to the front door of the hospital, who was sitting outside on the bench with his IV pole in toe… the Moti I know. They still are not sure what the blockage is or how to proceed with his treatment but he is on antibiotics and feeling much better. He still isn’t sure when he will be coming home but presently he is on liquids only, no coffee, cigarettes, shawrma, schnitzel, no BBQ.

Unlike the hospitals in the states, if you want to smoke or get some fresh air you can hop into the elevator and go out side. In the case of Kobi we just pushed his hospital bed out of the room, down the hall and outside. The Hadassah Hospital in Jerusalem even has a shopping mall attached to it. It was a trip to see patients in hospital garb, pushing their IV stand around the mall.