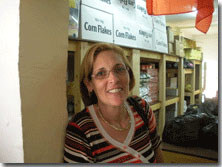 Yael has lived in Sderot all her life. Yael has been a kindergarten teacher for the past thirty six years. She is the mother of four and a wife for the past 22 years. She remembers Sderot before Gaza became an issue, before Kassams and a time when she was able to visit her friends in Gaza; but all that has changed. She misses her Arab friends in Gaza and wishes things were different.

For the past nine years, one Kassam after another has been fired from Gaza into Sderot and that has changed her life dramatically. She and her family live in a two story house that presently has no bomb shelter. Although one is presently being built. For the most part they have abandoned the upstairs, like many people in Sderot; because they are not safe if a Kassam hits their home.

When asked why they just don’t pack up and leave, she said; “we have lived here all our lives. I love my home and my town. See the tree outside my front door? It was planted when we first moved in and there used to be another one just like it on the other side of the entrance to our home, but they cut it down to build this bomb shelter. Now they will cut this one down as well. We will also lose the view and the light from our window once the bomb shelter is completed.

Yael has trouble and has had trouble sleeping at night for some years. She is always listening for “Tseva Adom” and the mother in her will not allow her to sleep at night. She manages to get about four hours of sleep a night. She has anxiety and has been sent to the hospital for it. So what does Yael do at night when she can’t sleep?… she crochets, makes jewelry and listens.

Even though it has been quiet here for the past few months, the people of Sderot have been traumatized. “There has been quiet before.” Yael’s husband adds, “We have been down this road before; we will be back at war within the next two months.” Let’s pray he is wrong.