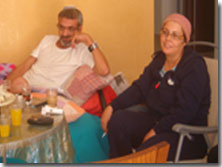 Today we visited Pinchas Amar and his wife Haliza. Pinchas, lying on a bed in the living room with his leg elevated on a pillow. He just came home from the hospital on Friday after a surgery on his right foot. They inserted stainless screws into the bone because the bones won’t heal properly.

The Amar’s home was it by a Kassam in November of last year. It blew a hole through the roof over the kitchen, destroying the kitchen and blowing out the window in the rest of the house. Both Pinchas and Haliza were hit by flying shrapnel in their legs. The fifteen seconds was just not enough time to make it to their

safe room. Today Haliza walks slow and with a cane.

Pinchas fell off a ladder recently and broke bones in his foot that were not healing properly, so this current injury and surgery is not Kassam related, but is just one more thing on their plate.

Before the Kassam attack they both worked, Pinchas brought in five thousand shekels a month (about $1430). Today he receives seven hundred shekels ( about $200) from disability. He will be off his feet for two months.

Hope for Sderot would like to providing in home care for Pinchas while he recovers from his recent surgery. We have taken care of this weeks expense and are trusting the our L-RD G-D for the balance. The Amar’s now have a bomb shelter connected to their home, (one of the things they wanted before they moved back in) but as long as Pinchas is bed ridden it won’t do him much good.

The interesting thing about this family is both Senator John McCain and President-elect Obama both came to visit the Amer’s. President-elect Obama told the Amer’s that if he was elected that he would do all he could to help end these terrorist attacks on Sderot. He also promised Pinchas that if he was elected that he would invite them to the Whitehouse. Pinchas wonders if now that Obama has been elected president if he will remember his promises to him and the people of Sderot.