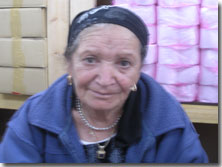 When she was thirty, Tamar, her husband and now four daughters moved to Sderot Israel to live close to her husband’s brother. When they first arrived in Sderot there were no paved roads, no running water, no electricity and no stores. In fact there were no houses, just tents. The Israeli government would distribute food once a week, like Hope For Sderot does today.

About 5 miles away there was electricity and an Ice House. Ice was delivered on a donkey drawn cart to the residents of Sderot. You could also go on horse back to pick up food or supplies if you needed. It would not be until 1968 until electricity would make its way down to Sderot. Until then you cooked on wood, pumped water by hand, carried it in buckets and lit your home with oil.

In 1969, at the age of 44, Tamar, gave birth to their last of six daughters. Her Husband was 105 by this time. At the age of 116 Tamar’s husband died and she never remarried. At 84 she comes to the moxson every now and then to help as she can. The last time she came by she brought enough couscous not only for all the volunteers but for half of the city as well!

When she reminisces about Sderot it goes way back to a time when life was hard but simple, way beyond the days of Kassams, Hamas and Tseva Adom.