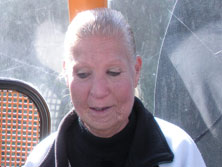 Shoshanna is one of our volunteers. She first came to us wanting to help when the soup kitchen she had been volunteering at closed its door last year due to the current global economical situation.

A mother of three children and the grandmother of ten, she has lived in Sderot for the past fifty-four years. She and her family have endured the past ten years of Kassam attacks and the periods of quite, which even though it is quite, the anxiety of the next Kassam attack is always on her mind.

She has lived a hard life. At the age of four, she experienced being a victim of terrorists for the first time as she was doused with gasoline and set on fire by Moroccan Arabs who lived in her neighborhood in Morocco. She has lived most of her life bearing the scars, the surgeries, the stares, the finger pointing and the disfigurement from that attack.

With those scars when her husband asked her to marry him she said yes assuming that with the way she looked she would never be married. In 1969, at the age of eighteen she was married.

Her marriage of the past forty-one years has not been the best and she was forced to be the sole bread winner as well as keep the home and raise the kids. Like I said, she has had a hard life. The adversity that Shoshanna has endured has left its visible signs, and perhaps the external pacemaker she now wears is a result of the affects of that difficulty and suffering she has endeared.

And yet, she is able to rise above it all. I have to say that among the many things that Shoshanna does to bless others, that she is probably one of the best bakers of all types of bread that I have ever had the privilege of eating and eating and eating! She has a beautiful heart, a lovely spirit, and a wonderful smile. It is her smile that this article is all about.

Due to improper hygiene, medical issues from the burns she suffered, lack of money, her teeth do not represent her smile. She needs new teeth so she can feel comfortable showing that smile of hers.

She is not asking for help to buy a set of dentures. It is a desire of my heart to bless this lady who has lived with scars most of her life by helping restore her smile. An estimate for a set of dentures runs just about $6000, in reality not a lot of money but for her unattainable and out of the question.

I am hoping, (because that is what this organization is about, bringing Hope), that G-D will touch however many hearts that it may take to make this blessing for Shoshanna come to pass. I pray and hope that there is a tender heart (or how ever many it takes) and an ear that will listen to the voice and the prompting of G-D, to be the tool in His hand to help the impossible in the natural to happen.
To be continued…