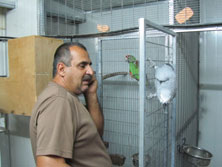 Shimon was born and raised here in Sderot. He is married and has two children. He was a welder and in as much as all wood needs to be imported for projects like covered patios and car ports most are made of steel unlike in the States. Needless to say, in Israel, the welding business is profitable.

Three years ago, at the height of Sderot’s daily bombardment of Kassam rockets, some days as many as thirty fell from Gaza, Shimon heard, “Tseva Adom”. (if you have never heard the Tseva Adom alarm click here) He ran to his bomb shelter and waited for the “Boom” from the exposion. What he wasn’t expecting was to have the Kassam land in his back yard.

He came out of his bomb shelter, which is just off the kitchen and within seconds, without any Tseva Adom warning a second Kassam ripped through the roof and ceiling of his kitchen. Shrapnel, glass, wood from the kitchen cabinets went flying everywhere. Shimon was injured in his right arm by the flying debris.

Four days later he was released from the hospital; the tendons in his right arm had been severed, which left him not only for the short term out of work but also from that day on he was unable to hold or carry the metal as he once did in the fabrication of the carports, patio covers and other welding jobs

Unable to provide for his family and now living in fear; as with many others who have been injured either physically or mentally from terrorist Kassam rocket attacks he fell into depression. To top it all off he now had to begin the fight with the government to receive the funds it would take to repair his home.

Months later, with the repairs made on his home and a new life of not being able to work in his trade, he continued to fear going out from his home as “Tseva Adom” was still sounding daily.It was then that a third Kassam hit just outside his home. Once again glass went flying, the 100 gallon fish aquarium shattered and his birds that he raised were dead and now he would once again have to fight with authorities to make the repairs once again. Authorities were reluctant to help saying “we already paid for those repairs”

His depression became deeper and he felt suicide was the only answer to his fear and depression. Praise G-D he did not succeed. Today Shimon is doing well. What brought him out of his depression… raising birds.

Today Shimon has a 400 square foot aviary in his back yard with twenty or so pairs of different exotic birds that he breeds and sells the baby birds. He loves his birds and as he opened some of the cages they come to him and give him a kiss, a peck on the cheek.

The depression has subsided and since the end of the “Cast lead” operation in Gaza the fear has lessened but he as all of us who live in Sderot realize that the calm ( with only 458 rockets fired from Gaza since the end of “Cast lead”) can end before you finish reading this paragraph.
Shimon spends his time with his birds and does not mind the hours it takes each day to keep the aviary clean and the birds fed. The constant chatter of the birds, that would drive me crazy, is soothing to him and is like music to his ears.