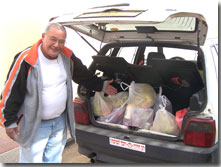 Noam has lived in Sderot for over thirty years. He was a bus driver for soldiers.  He has a wonderful wife, Marion, 3 children, 7 grandchildren and a great life.  That is until November 2006 when he heard “Tseva Adom.” His life changed in a split second. The Tseva Adom was followed by “Boom”. The Kassam hit just three meters (nine feet) from where he had taken cover, just on the other side of a one meter (three feet) high cement wall.  The roof fell in on him.

His physical injury was limited to loosing his hearing out of his left ear. It was, and still is the emotional injury that he suffers most
from today. He is recognized by the country as being injured by a Kassam with sixty percent disability. He has spent most of the past year and a half in doors, afraid to go out, afraid of loud noises, just sitting.  He was in four Israeli wars and never scared, but now he is.

Traumatic emotional injury is a hard thing. I have been told that when a person has a physical injury from a Kassam, that there is some what of a mental release, a cleansing, and a healing with the shedding of the blood. Where with a mental injury there is no release and all that fear stays pent up with no way out and nowhere to go; so you wind up sitting in your house with your fear.

When we came to visit Noam the other day, we had a wonderful time of fellowship. As we shared our Hope for Sderot and how we want to help the injured people of Sderot, he said “thank you for coming and letting me know I’m not in this alone.”

The L-RD called us here to live with the people of Sderot and to become one with them and one of them, so when a person talks about their experiences of living with Kassam rocket attacks and Tseva Adom you have some idea from your own experiences what they have been through and you can now relate in some small way.

By the end of the visit Noam said he would like to help and volunteer with us. We told him that we were scheduled to make our first distribution the next day and we would love his help. He said he would see if he could come and help. As we left I realized that G-D was going to use Hope for Sderot in more ways then just passing out food. He was going to use it to give hope and purpose back to the “Noam’s” we meet along the way, as we follow His cloud by day and His pillar of fire by night. I am so glad this is His work, His organization. Hudson Taylor said concerning the work G-D called him to do, “It gives me great comfort to remember that the work is His; that He knows how best to carry it on, and infinitely more interested in it then we are.” So as He leads, we will continue to follow, pack bags and be His delivery boys and girls.

At 10:30 Thursday morning, Noam became one of His delivery boys as he delivered bags of food to four families who just can’t come out of their homes yet.