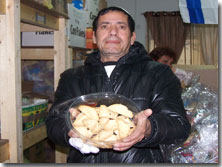 We made a home visit to Moti almost a year ago. Moti was off work do to an accident that caused him to loose the tips of three fingers on his right had. His wife Dallia has partially lost her sight and is unable to work. The financial pressure of one temporary income from disability coupled with daily Kassam attacks was taking its toll. We were able to help them with food on weekly bases.

Through our contact with them Moti asked if he could come and help… Dallia was happy to see him have something to do while recovering and so Moti came to help. What started out as a cry for help turned into an opportunity to help others. Moti has become a dear friend and a wonderful brother. He is willing to come whenever we need help.

In the beginning, Moti told us that when he got back to work that he would be able to get reusable nylon bags to put our weekly food in. As time went on it seemed that Moti would not be going back to work and that we would have his servant’s heart forever, but G-D had other plans.

Three weeks ago Moti was given permission from his doctor to go back to work, something that was now a bittersweet situation for us all. Moti is back at work full time now and he is missed in the moxson. Within the first week he called me to ask if I could stop by the bag plant he works at because he had three hundred of those bags he promised us nine months ago. This past Wednesday he brought us six hundred more bags.

This man of his word is dearly missed in our daily operations although he does stop by after work to see if he can help. He misses us as much as we miss him but he is happy to be back at work. He says he has a good boss and a good job. We can attest to that as his boss continues to donate bags to us, that other wise would cost us three shekels each… How great is our G-D! That He moves on people’s hearts to help us help others.