We were invited to a birthday party this week. Mia turned one year old today. Mia is one of the little ones whom you supply with diapers, and her parents receive the food you give as well. Mia has been receiving help from you since she came home from the hospital.

It is something to see this little girl growing up right before my very eyes. Today she is not aware of the crises brewing in Syria nor does she know her tiny state she lives in is surrounded by governments and peoples that want her, her family and every other Jew living in Israel to die, and she has no idea what “Tseva Adom” means, or that she has fifteen seconds to find a safe place to hide when that alarm sounds.

While at the party, I saw Matan, the now-young man whom I first meet five years ago. Seven years ago Matan was coming home from school when the “Tseva Adom” alarm sounded. He started to run for cover, but he did not make it. The Kassam landed within five feet of him. The Kassam took a major part of his left foot off. 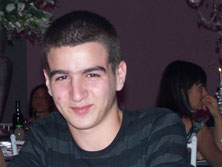 The next two and a half years he would go through one operation after another, one infection after another; this is the point in his life I first met him. The doctors did all they could do to save his foot but in the end it was amputated.

It has been four years since I last saw Matan who is now twenty three. He lives in Beer Sheva where he works and goes to school full time. He received a phone call during the course of the evening but because the music was so loud he got up and went outside to talk.

The thing that blew me away was the fact that he ran out of the building. I sat there in awe and with a tear in my eye to see how this young man had overcome a terrorist attack on his life, by people who wanted to kill him because he was Jewish.

I pray Mia never goes through any of the pain Matan has gone through and I hope to be invited to her birthday party next year as well.