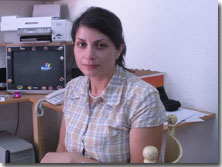 Ladana came to us as a referral from another organization here in Sderot. Her story is one of being between a rock and a hard place in so many areas of her young life. In her first marriage she had three children. Two of her children were twins with Down syndrome and they died a few years ago. Her oldest daughter is now eight. Her first marriage ended up in divorce.

She remarried a man that is not Jewish and they are having a hard time obtaining permanent residency or citizenship for her husband, a situation that could cause him to be deported. They have a two year old son from their union who is healthy and fine. Ladana’s husband can not get a job because of his citizen status, which leaves Ladana as the sole bread winner… Here is the next rock and hard place.

The economy in Sderot has been suffering for the past nine years, as long as Kassam rockets have been fired at Sderot from Gaza. Ladana is only able to find part time work. As a result most of their possessions have been repossessed, their home is in foreclosure and they have been given an eviction notice.

Next rock/hard place… She needs beds for her two kids. It just so happens that a few weeks ago someone gave us a bunk bed frame; all we need to do is find a couple of mattresses for her and she can move that rock. Finding a new place to live will still be a problem for her.

School started September first and up until her visit to us her daughter did not have her school books yet. Between a scholarship from the city and a donation from Hope For Sderot, she was able to pick up her daughters books on Tuesday of this week. One of our volunteers had received a 250 shekel gift certificate as a Rosh Hashanah gift from one of the local markets which he gave her. Another volunteer will be taking her and her two kids clothes shopping one day next week. We have added her to the food list and on Thursday she will pick up her first supply. Needless to say she left in tears praising the L-RD for His goodness and His love towards her. Baruch Ha’shem!