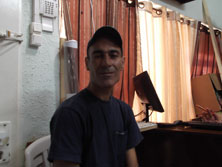 Though the fig tree may not blossom, Nor fruit be on the vines; Though the labor of the olive may fail, And the fields yield no food; Though the flock may be cut off from the fold, And there be no herd in the stalls— Yet I will rejoice in YAH, I will joy in the God of my salvation.” Hab 3:17,18

It is not uncommon for people to come in asking for help, in fact they do it at a rate of five to ten households a week. Today we have a waiting list we put those who qualify for help on until we have an opening to put them on the list of people we can help on a regular bases.

Needing more food or funds is not what this story is about but rather it is a story of compassion and hearts that care for those we serve.

When Itzac walked in on Wednesday he came to ask for help with food. He came to the counter where our volunteers work and proceeded to tell Eti his problem and how he is out of work.
As he was telling his story, Eti noticed that he did not look at her or Nana in the face but explained his situation with his head hung low, making no eye contact at all.

Eti stopped him and asked him why he was looking down, why he wouldn’t look at her or Nana while he was talking. With a tear in his eye he said he could not look at them in the face because he was ashamed and embarrassed to be here asking for help but he had no other choice, no other place to go to ask for help.
Eti told him to lift up his head and to look at here in her eyes and she proceeded to tell him that he is no different than her or Nana and that he had nothing to be ashamed about, we have all been where you stand today.

As the depth of Itzac despair reached Eti and Nana , their emotions could not be contained and now the three of them stood at the front desk in tears. One of our volunteers who receives food from us came to me and asked if she could give her bag of food and Rosh Hashanah gift to Itzac, she asked it that would be o.k.
I told her “no” you don’t have to do that, you need your food for your family, but go and take food and the gift off the shelf and give it to him, which is what she did.

I don’t know how many of you have ever been in the situation of needing help or have had to stand in a welfare line or go to a soup kitchen; it’s not an easy thing to do. Your self-respect is gone there is no self-esteem left; I like some of our volunteers know it all too well.

Not only was Itzac given the help he humbled himself to come and ask for but he was treated with respect and dignity, with compassion and love. When everyone’s eyes were dried the three went their way praising YAH; Itzac for the help and caring heart he received; and Eti and Nana because they were able not only to give Itzac food but lift his spirits as well.