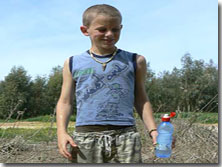 Meet Gabi
Gabi is a ten-year-old boy who is growing up on Kibbutz Nir-Am. He has never known a time in his life without Kassam rockets. His life has been filled with one explosion of kassam rockets after another. All his life, they have fallen all around him, one of them within ten feet of his bedroom. Only in other war-torn parts of the world are children subjected to these conditions. He seldom knows whether he will be sleeping in his bed, a bomb shelter or off the kibbutz altogether.
What are the effects of growing up like this?  Marcell, Gabi’s

mother says “The effect has been most obvious on our children. At home: bedwetting, aggressive behavior, extreme mood swings, insomnia, loss of appetite . . .   and at school: lack of concentration, absenteeism, hyperactivity, outbursts of anger and physical and verbal aggression.”
In spite of what he has to live with, Gabi is still just a child filled with great joy. He likes being out doors, riding his bike and playing sports, even though he knows at any time he may have to run for cover. The long-term effects on him and other “children of the Kassams” is still to be studied.