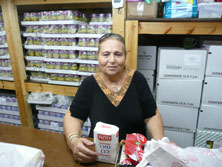 Flora is a single mother of six children. Two of her children have been blind from birth and they now live in a home for blind children in Jerusalem. She makes the trip from Sderot to Jerusalem each week to visit them and to bring some of their favorite food that she cooks for them.

Flora was born in Morocco where she lived with her parents. During the 1950’s, Morocco was experiencing political unrest between the French and the Arabs. He father felt it was unsafe to remain in Morocco and so leaving all their personal belongings behind and they moved to Israel.

Flora moved to Sderot with her six children in 1964 when her marriage ended in divorce; apparently her husband forgot he was a married man. Without her husband and support for the children, life has been hard. Taking care of her six children was a full time job and with the additional responsibility of caring for her two blind sons, she had to become a stay at home mother.

Life with two blind sons is hard enough, but in 2001 when the Kassams began to fall it added extra stress to her life. Being able to see and running for shelter is one thing but try it without being able to see. Her sons fell many times as they made their way to the safe room. It was because of this she felt it was best for the boys to move up to Jerusalem.

When asked if she had ever thought about leaving Sderot she said, “Even if I had the money to move I would not move.” The reason she stays is because of the people that live here; “They are friendly and we are all family”.

We have been able to help her for a while now and we have both been blessed by the provisions of Ha’Shem. Recently she has begun to volunteer with us on our food distribution and food packing day, wanting to give back to the organization that is helping her.